How to listen to music and create ballets that audience would like to watch? Chapter 1

American composer and pianist Richard Cameron-Wolfe explores interrelations between music and dance, promotes modern classical music or «sound art», creates micro-operas, performs and teaches. Former musician of ballet and modern dance companies, including the Joffrey Ballet and the Jose Limon Company, told Balletristic about the peculiarities of working with dancers, why it is difficult for people to perceive modern works, how artists interact with the audience and how to take the first step into modern classical music world.

On the collaborations between music and movement

From the dawn of civilization, music and movement had always been experienced together, often connected with singing and poetic text. For example, the troubadours and trouveres singer-dancer-poet-entertainers from the Medieval period. In the Renaissance, the most popular social dances were the pavane and galliard. These and other dances of the royal courts, accompanied by instrumental ensembles, became the foundation on which ballet is based.

So, very early in life I enjoyed playing piano music for dancers, because I had an intuitive sense that these two art forms were connected. Especially in classical ballet, I saw that each movement was closely connected to every pulse and phrase of the music.

Unfortunately, dancers are often more focused on technique and mirrors in ballet classes than on a deep connection with the music. Often the ballet musician feels like a secondary element, whereas in modern dance, the dancers have an opportunity to become more involved with the sonic impulse that catalyzes the body move in a certain way. Usually, modern dancers in the USA study anatomy and kinesiology, so they are more aware of the body and don’t need to rely on the mirror. Also, the modern technique teachers don’t expect everybody to look exactly the same in doing a phrase. Ballet dancers should be encouraged to become more aware of what is happening in their bodies, why they are moving.

It’s possible for the techniques and aesthetics of ballet and modern dance to come together with satisfying results. The 1980s choreography of Igal Perry and Eliot Feld are great early examples of American ballet that has an impressive modern-dance-like freedom.

On why do people still listen to and watch classics

In schools, if classical music is taught, young people are being trained in the mentality that it’s important to know what the masterpieces are. But from the earliest times until the late 19th century, people only heard music of their own time — new music — and always wanted to hear something new. When somebody created a new dance, everybody was able to learn it or at least watch it. Louis XIV collected social dances all over France and introduced them in his court, where everybody wanted to learn them. So people wanted to live in the present moment, each day anticipating new aesthetic experiences.

Things changed at the end of 19th century, however, when music entered the university curriculum as an academic discipline. People started to learn the history of music, to analyze music and develop theoretical models. Academic scholars focused on music of the past. Meanwhile, contemporary music of the end of 19th century was making an aesthetic transition from romanticism, through post romanticism, with impressionism and expressionism waiting on the other side. This “new music” didn’t fit into any of the academic analytical models, and it was not yet “history”.

Second came radio. When the radio was invented and people had a source of music in their houses, the stations interested in broadcasting classical music decided that they would play programs of academically-designated masterpieces. At the beginning of 20th century they didn’t want risk at all by playing the avant-garde modernists of their time. Stations wanted to build their audience.

Finally, there came phonograph record players. Recording companies recorded only the classical masterpieces established by musicologists, such as Beethoven’s Symphony #5, or arias from Verdi operas. So for the first time in history, instead of being directly involved in the music of their own time, people were encouraged to agree with those who said: “This composer is a master”. And even when most of the time musicologists were right, classical music became a historical museum. Do you want to spend your life in the museum? Or do you want to go out into the unmapped forest of our time?

A similar thing happened with ballet when it came to the American universities. It came not as a separate discipline, but as a component of the school’s opera program. For universities doing historical opera, this created a real necessity for trained ballet dancers. And modern dance came to the American university through physical education programs, as an extension of gymnastics, without being even respected as an art form in the early years (1930-40s).

In a strange way, the best point to start your 21st-century musical journey is at the beginning of 20th century. For example, Impressionism in music is often associated with visual images and Expressionist music with stories and psychological states — extra-musical elements which help the listener to understand it and move forward to appreciate more difficult music pieces. So, the challenging sounds become more acceptable because of an association with an image, narrative, or idea: for example, «La Mer» of Debussy or «Don Quixote» of Richard Strauss. Focus on that kind of music that also involves something other than sound.

The present-day audience needs a “hook” — a doorway into unfamiliar musical territory. The avant-gardists of the 1920’s, who came after the Impressionists, deliberately took music too further than the conservative classical music audience could tolerate. But when the music styles evolved so quickly, the pendulum swung back, and a style called Neo-classicism developed as an “antidote” to the avant-garde.

At the end of 1950’s another avant-garde arose, with electronic music, the “chance” music of John Cage, the ultra-complexity of Stockhausen, and the more-easily digestible minimalism of Steve Reich and Phillip Glass. Recording corporations started to promote pleasant, non-threatening minimalism without understanding the simplest principle of minimalist process – the gradually evolving theme. For many people, minimalist music seemed to be just nice, non-confrontational doodling along forever and ever, so it quickly became an easy-listening commercial success. (It also became a favorite musical resource for young choreographers, most of whom were  completely unaware of the minimalist creative processes.) Other non-minimalist composers, who also wanted to be heard, had to go back to (BACK TO!) Neo-classicism or forward/backwards to Neo-romanticism.

Of course, there is an inadequate musical education of children. Nevertheless, when I play avant-garde music, as well as Mozart, to children of 5-6 years old, they love it, move around to it, and accept it. It’s all new to them. They don’t know and therefore don’t demand “REAL” classical music. They are free of musical biases.

So, can you progressively move from Debussy to the music of today? I’m not sure if you can, because there is a big gap in the middle, where the only thing mainstream classical music audiences tolerated was Neo-classicism or Neo-romanticism, and because it seems almost perverse for Neo-classical style to be “re-born” instead of new styles and new directions.

So, I don’t know whether the mainstream ballet audience will ever overlap significantly with the modern/contemporary dance audience. And the same with the historical classical and new-music sound-art audiences. Audience building for contemporary dance and contemporary sound art would be most successful if devoted to creating a NEW audience, rather than trying to “convert” the conservative “historical museum” audience.

When you speak about creativity in performing arts, you have a composer and choreographer (who create a recipe), musicians and dancers (who do the cooking), and audience (who are served with the cuisine). That’s probably why, for example, Jiri Kylian introduced modern movement but didn’t abandon the classical music the audience expected (he made that hook, encouraging people to accept what they see). On the other side there was Bejart, who did completely unorthodox things with Karlheinz Stockhausen’s vocal piece “Stimmung”. There was a kind of fire in the middle of the stage, 6 singers, singing all the names of god in all languages and all religions for 72 minutes, with dancers who had the freedom of timing and were always in motion, without exiting the stage during the whole performance. Ballet audiences hated it. But Bejart brought so many people from outside of the ballet and theatre audience, that there was a need for a new choreo-musical dialogue about what is ballet. 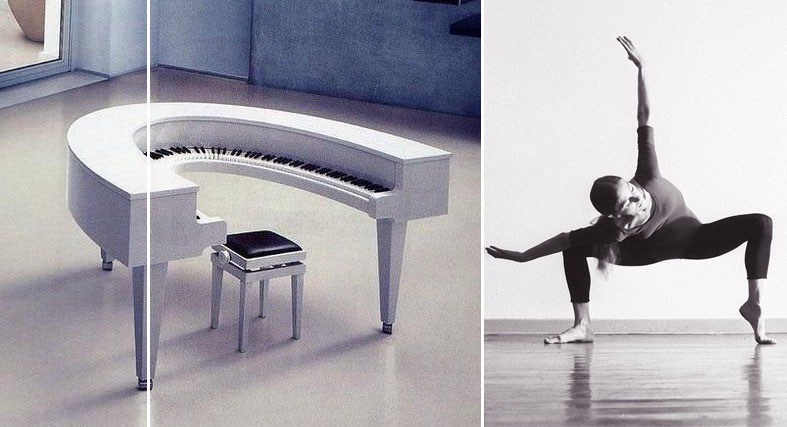 Now, in the larger cities of the USA, and also in university communities, there is a new audience for contemporary music, but not so much for contemporary dance, because many choreographers still don’t embrace the idea that the audience completes the whole creative process. People must feel included, but not be voyeurs of something that doesn’t involve them. And to provide the connection – by strengthening the choreo-musical dialoge of their work — dancers have to understand the anatomy and kinesiology of music and respond to them, interact with them, through their movement. Thus, if choreographers and dancers don’t hear the activity of the music, the audience won’t either. Meanwhile the dance and the music go their own separate ways, and the audience is adrift between them.

People are always attracted to what we in general call “beauty”. But, speaking about art, where is beauty on its hierarchy? What should be put on the first place? For me, it’s Truth – you have to tell the truth — and if beauty follows from that truth, wonderful! But if it doesn’t, truth must be heard and respected. Ballet has a sort of recognized vocabulary. But can we add some new words and ways of movement to that vocabulary? I am optimistic that classical ballet can evolve as a contemporary art-form.

Revealing the voice of dance.